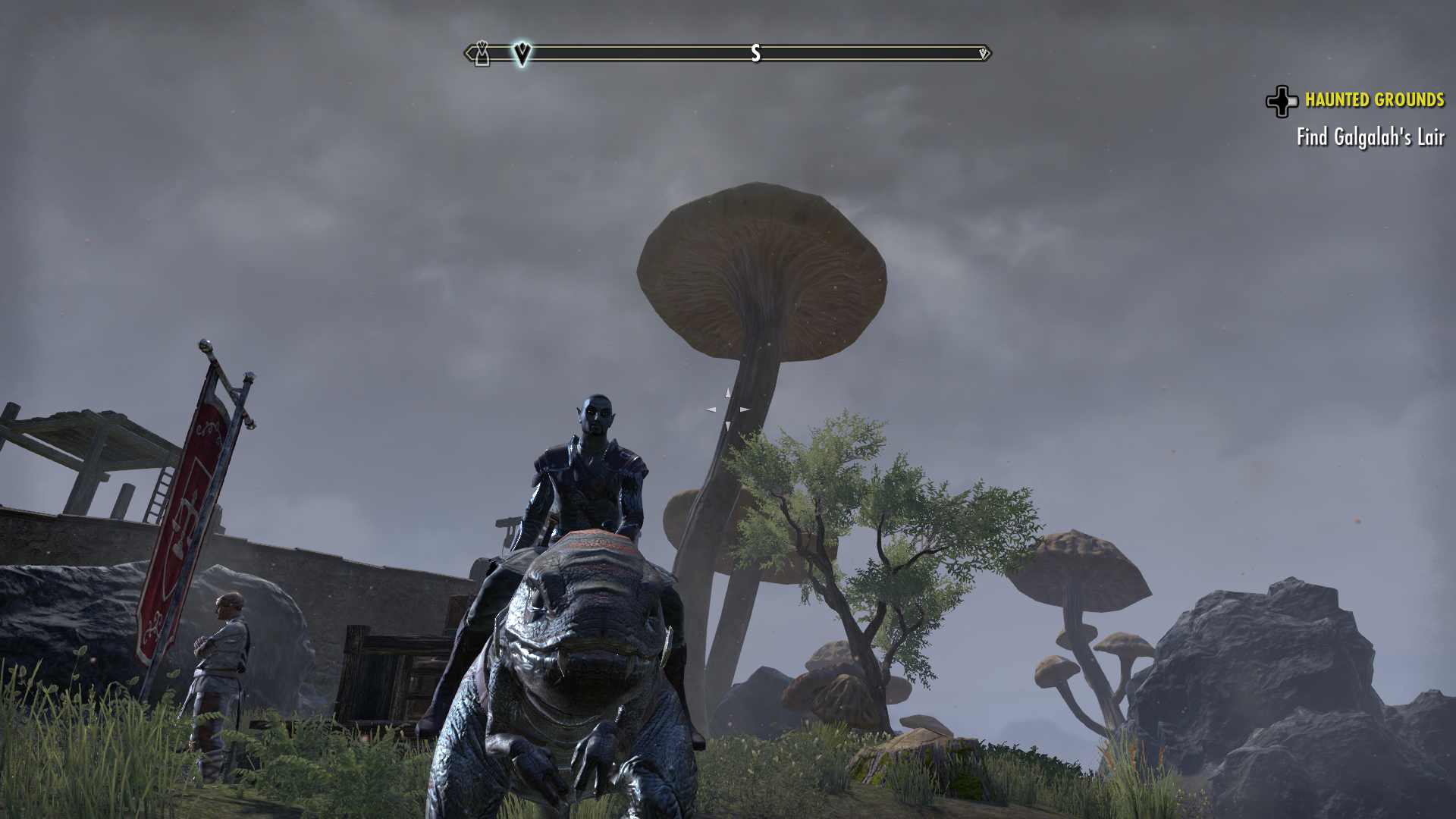 Hey, you know this game, the followup to Skyrim, the one we are all dreaming about and won’t come out for the next like five years? Yes, yes, it is sad, it is OK to cry. And by the way, if you answered Skyrim 2 to the above question, you are free to leave.

By all accounts the next installment in one of the best RPG series is not coming anytime soon. Unless Bethesda aren’t purposely lying to us that they haven’t event started making it, those bastards. In a need to scratch that Elder scrolls itch, many have turned to the once despised Online counterpart. Now, I won’t get into polemics in this article regarding the quality of the game and whether it is a true Elder Scrolls experience. I will however say that the game nails many aspects of the core feel quite well. While playing ESO I have noticed some nice touches to gameplay elements present in the series since its 4th and 5th entries.

I have picked three things that while being only small improvements in ESO can actually have quite the big impact in Elder Scrolls IV if added there. So if anyone in Bethesda is by chance reading some super random guy’s blog(you are strange!), TAKE NOTES. Here are the 3 mechanics from ESO that can have huge impact in ES IV:

In Online I play as a member of my beloved Dunmer race and must say, there is ALOT of talking to the dead. Being part of a race whose culture revolves around honoring their lineage and ancestors, summoning the latter be it for an advise or to do your biding is a common thing in the Dark elf main quest as well as the Morrowind expansion.

If you are wondering how this might improve the gameplay in ES numero six, here is the thing: it unintentionally introduces a solution to one of the most annoying mechanics since Oblivion: immortal NPCs. Ever wanted to just end the Civil war quest line by simply walking your level 60 something character to Windhelm and one-shotting Ulfric Stormcloak while also killing half of his men only by looking in their general direction? Well, though luck, buddy, cuz YOU CAN’T. I mean, you CAN kill half of is men only by looking in their general direction. But Ulfric, killing him, nah man, you can’t do that. No matter how long you smack him with your uber sword(giggity) he will just kneel on the ground for a few seconds, then he will get up healed like some kind of Call of Duty character.

This of course breaks any kind of immersion in a mighty fashion, but is there for a reason. Two reasons, actually: you and the environment. As mister Stormcloak is part of an intricate world, being mortal would mean that he could die in various, unexpected ways. It would really suck if the player returned to him to turn in a quest, only to find that the NPC has been killed offscreen by a vampire/dragon/primeval god-boar(hello Gothic 3). The other part is the player himself. It is one thing to kill a NPC on purpose, but what if you killed it by accident in the heat of a battle while defending it from the aforementioned mythical beasts?

So why don’t you make all NPCs killable but add a way to talk to their spirits? It could be something very simple like adding a scroll that summons the entity at their grave. Or it could be much harder, a way to make the player think twice before going on a murder spree. Let’s say you would need to gather some super rare ingredients and go through a series of steps in order to perform the ritual.

If you want to go even deeper, there could be spells that can summon the spirits. Depending on the spell’s level the ghost would be more or less helpful. On lower levels it will smack talk you for killing it and even the quest reward could be worse, while on a higher level it would be in a full cooperation mode like a Justin Beiber fan meeting his/her idol.

In today’s gaming world quest markers are not only the norm. They are pretty much the only way to go. Once upon a time(when Oblivion came out to be exact) however, they were a pretty big innovation. More than that, it was like a gift from God rewarding anyone that has played Morrowind for all the suffering they have gone through. Anyone who has played the game knows what I’m talking about: no markers, only vague explanation where to go. While this sounds fun at first(encouraging exploration and whatnot) the directions given by the NPCs were many times extremely sparse or in some cases downright incorrect. And don’t even get me started on that Cavern of the Incarnate location, which appeared only at dawn or dusk, OH GOD WHY, WHAT HAVE I DONE TO DESERVE THIS!?! Add to the fact that ES III had no fast travel and stamina depleted while running(not sprinting, running). I have even gotten to the point of using the Construction kit in order to get an idea of where I am and where I need to go.

So I guess by now younger readers can understand why quest markers were a huge step in the Elder Scrolls formula. Unfortunately, I can say that in Skyrim they are more of an annoyance in the way how punctual they had become. I can’t say the take away from the exploration element, you will stumble upon plenty of stuff on your way to the Big arrow. Rather they rob you of involvement with the world, dull your sense of your surroundings. Worst offender I can think of at the moment is Vaermina’s quest where at one point you are required to find a book in a library and the marker is pointing straight at the damn book. It’s not that it is a big library, there only a few, mostly empty shelves and the book is quite big. So why make it so simple?

Using Elder Scrolls Online’s system would add much to the experience without deviating too far from the main idea. In this game many of the quests give you a radius of the place where your next objective is. It is not only for “kill X” type of quests either. Some times you would need to look for clues for example. The coolest part is that when you come too close to the stuff you would need to interact with, the quest marker would appear thus preventing the player from pixel hunting and saving the more unobservant ones.

Having a radius marker actually makes a lot of sense. Let’s say you once ate like the best burger in your life in a neighborhood that you don’t know all too well. Will you be able to tell your friends the EXACT spot you had a foodgasm? Probably not. Most probably you will say “well it’s between here and there”. Same with NPCs, it would make more sense that they would known only the general area where you need to go.

Another thing Oblivion introduced to the RPG series were the hairy majestic beasts known to humankind as horses. They were a flavorful addition, a way to underline the vastness of the world, as well as a companion for the long adventures ahead. However when it comes to the roleplaying aspect of the game, I would say that horses don’t add much. Playing as a honorable warrior? What are you riding? A horse! Playing as a cruel mercenary? You are riding the same horse(maybe not the gray one, but the one with the spots). A thief? Obviously a white, cooler looking horse, cuz you stole it like a boss. A mage? A horse made of plastic. And that’s not the good plastic either, rather the one that they make those cheap Chinese toys out of. You get the idea, either you go by foot or you use one model and a skin of your choosing.

I remember playing a thief with affinity for dewemer technology. I really wanted to ride something that displayed my interest, but alas, the game did not offer anything of the like.

You know which game does? Online being the modern MMO it is has a cash shop with all sorts of shiny stuff in it. Although hiding those behind a paywall really sucks, there are a lot of different riding creatures for you to choose from. There are bears, tigers, guars and all have a slew of different skins to further the diversity.

And while having one of these in ESO is to me not much more than a vanity item, having such a creature in the single player counterpart can really increase the immersion. If we go back to my fantasy Nathan Drake equivalent from earlier, ESO has a ridable dwarven horse, dwarven wolf, dwarven camel even. So I could not only show my dwemer fetish, I could emphasize a different aspect of my character as well(origin for example). Wanna play a mighty druid? What about a wolf you have(or at least pretend to have) tamed yourself? That would be a nice finishing touch to a character crafted with love.

Same goes with pets. Skyrim had only a few like Vigilance and the huskies, and they weren’t offering anything different than a bypedal companion. Quite the opposite actually, since you could give them less commands and had nothing to say(Vigilance has few cool “woof” lines I suppose).Again, pets in Online are mostly for show, however there are many different flavors to choose from. Playing as an adventurer or a thief? Why not choose a monkey to indicate that you have ventured to exotic lands. A wizard? How about a daedric pet or a cat(everyone knows only a true wizard can tame a cat).

Elder Scrolls VI could even introduce skills related to pets and mounts similar to Fallout 4 to integrate them even further in the core gameplay experience.

So these are the 3 ESO mechanics that can greatly improve the next Elder Scrolls game. Whether it will have anything like that or the game will be so different it would not even need those, only G(T)od Howard knows. Until then we can only dream of what the game will be and talk endlessly about the features we want but most probably won’t end up in there. But you know what, its OK if such features don’t get the cut. Because mods.

5 games that will prepare you for St. Valentine’s day

5 games you should DEFINITELY play on St. Valentine’s day