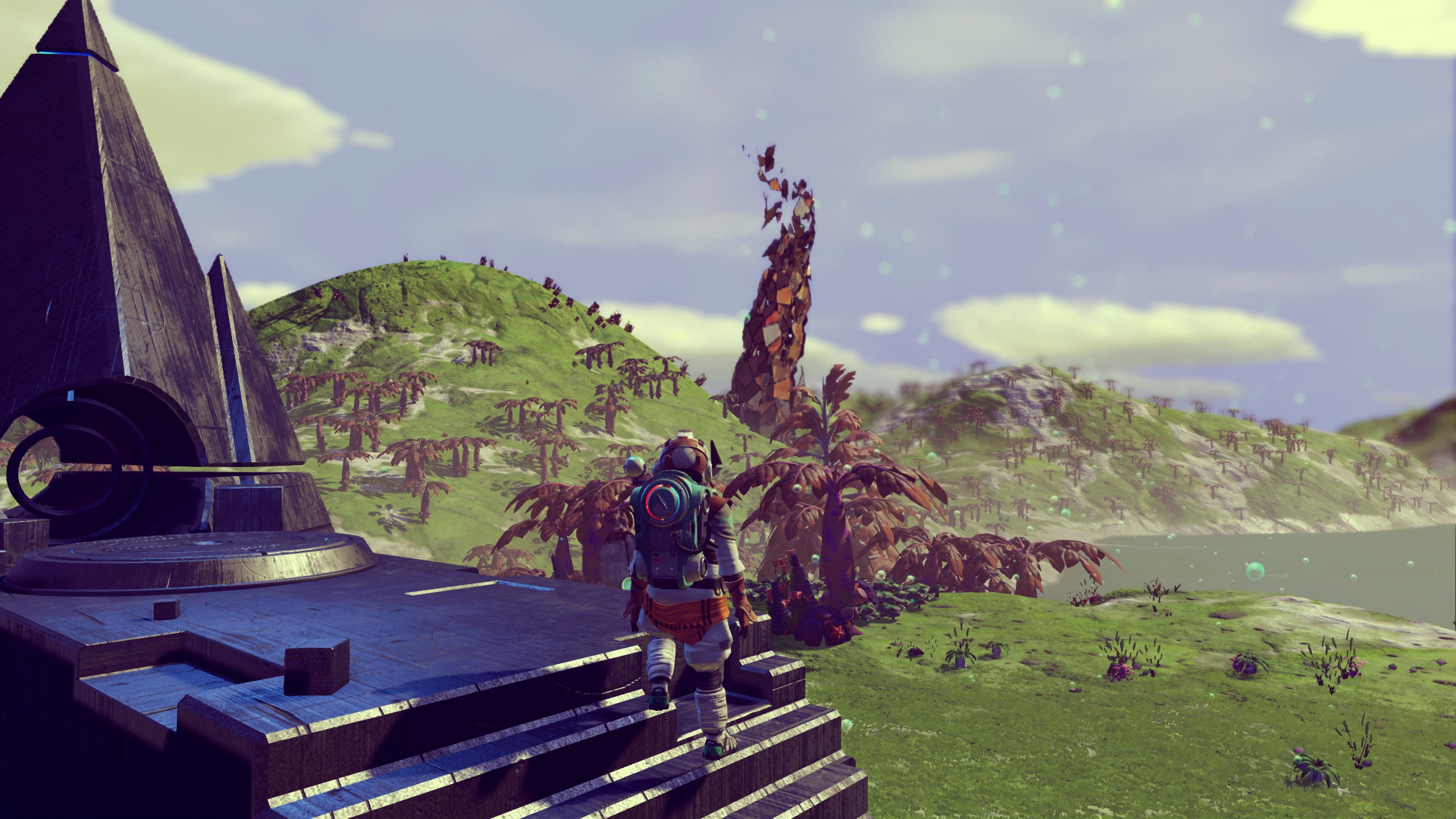 No Man’s Sky has gone a long way, from a total space wreck to an OK sandbox game, to one of the best games ever made(yeah, I said it). Still even with all the updates that are being poured in at a steady pace, there is always some room for improvement, right? Leave it to the modders to help with that! What we have today is not just a mod for NMS, it is quite possibly the most ambitious one out there. Where most mods usually change only a few specific things in the game, NMS: Fantasy is going on the overhaul path, aiming to improve upon practically every aspect of the game.

The first feature that immediately pops out is the planet generation. Now, I think the Beyond update improved upon that a great deal, but man, the environments have never looked so stunning! The variance in terrain generation is quite noticeable with very high mountains and deep ravines on some planets and endless plains and colorful pastures on others. Fantasy also mixes objects that could previously be found only on specific types of planet and adds them to other biomes as well. There are also new structures either pulled from unused assets of the original game or courtesy of the complimenting Constructs mod. All of this, combined with greatly increased object and creature spawn rate make the planets look, well, more like real planets, actually. They are now far more rich, lush and overall interesting to explore! This by far is the best thing in the mod and rekindled my desire to discover new worlds in No Man’s Sky.

Now, as mentioned there are a lot more changes the overhaul introduces. There are a few graphical improvements I particularly liked such as increased draw distance and increased saturation. Fantasy also comes with a number of graphical presets which can additionally modify the look of the game. On the gameplay side of things you can find tons of adjustments and additions. You can, for example pick a character and class to start the game with, which gives you a specific look, ship and tools. There are lots of other changes, from frigates having trading terminals by default to making the mechs giant, to improved character customization. To be honest, it will be crazy to go through all of them here. My advice, should you choose to try out the mod is not to go with its merged version, but download the one where every change is a separate mod, then go through the documentation. This will take you more time, sure, but this way you will change exactly what you want in the game. For example, you might not like the mining speed(greatly increased) or the basic jetpack duration(to infinity and beyond) that the merged version has. Again, go through the documentation and choose exactly what you like, just as any self-respecting modder would do.

For as good NMS:Fantasy is I ran into a few problems while playing it. See, as there are no official modding tools, things are prone to go south in different PC environments. The construct mod just stopped working a few hours in and I needed to remove it in order to load up any of my saves. Speaking of loading, every time I load a save I find an obsolete technology module in my inventory(at least this bug gives me an infinite supply of Wiring Loom). Worst of all leaving a planet happens to crash the game far too often. Bear in mind it’s possible none of this happens to you or you experience some completely different bugs, or none at all. These are just the risks of not having official modding tools in the game. Just make backups of your savegame files and you’ll be just fine(I hope).

In any way I do believe NMS: Fantasy is worth all the hassle as it brings new life to the core game and it does it in a bold way. Until Hello Games gives us the new big expansion(c’mon, how long should we wait!) I know this mod will keep my space exploration needs more than satisfied.

Sim Settlements: One of the best mods ever just got better