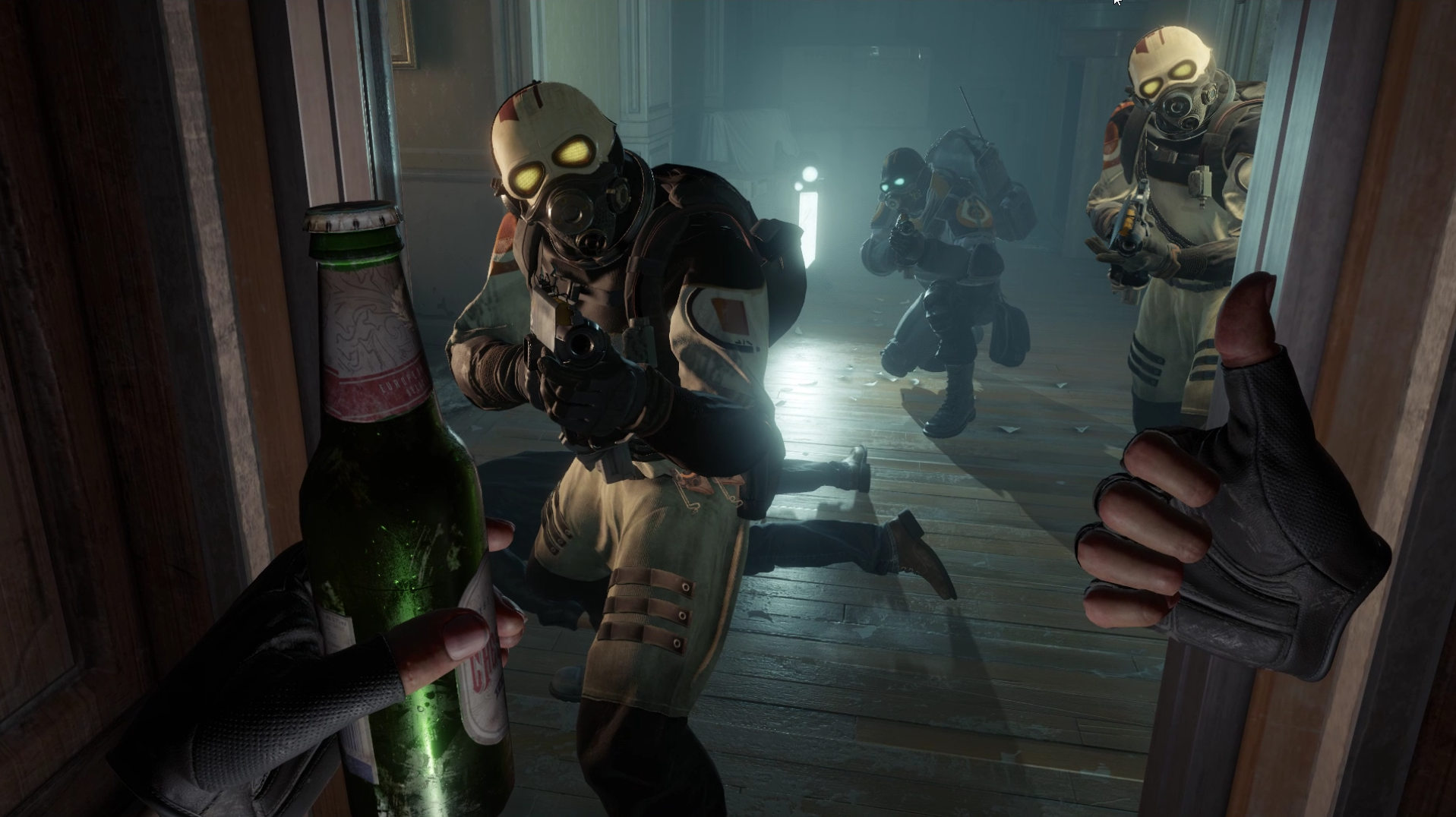 Imagine that, a new Half-Life game! I doubt that anyone, besides the franchise’s biggest fans had still had any hope this day would come. Yet here it is, thirteen years after Episode 2 we are finally able to get back to City 17 in all its decaying glory. Unfortunately, there is a small prerequisite. And by “small”, I mean owning a pair of 500€ fancy goggles(at the least), called “VR”.  But hey, what are 500€ for the chance to play a new Half-Life game, right? Me, having a bit of a spare time due to the lockdown and(thankfully) some spare money got myself a Rift S set and decided to give Alyx a shot. Of course the irony of the fact that I’m running from reality by playing a dystopian game in a city, based on my current living town, where an oppressive government is controlling every aspect of people’s lives and where going too much outside could kill you wasn’t entirely lost on me…

“But what about the game?” I hear you ask(or maybe it’s just my inner voices, who knows). It’s… well… actually very good, not only as a VR game, but as a Half-Life one, too. In my eyes it is a worthy successor to the legacy that the franchise has built. Is it worth buying a VR set for it, though? That’s another question, which I hope to answer below.

Half-Life: Alyx puts you in the shoes of the titular heroine a few years prior to the events of Half-Life 2. Now, more than a sidekick of the silent professor with a crowbar, she will have to face some really tough challenges of her own. Mainly: 1) Saving her father from the clutches of the Combine. 2) Finding out what he found that got him arrested in the first place. 3) Possibly saving the whole of humanity along the way.

The narrative follows closely the formula patented in the first two games, where it is dynamically presented to the player by either stumbling upon conversations or through environmental storytelling and scripted scenes. This time, though, Alyx has a voice of her own and it is her and her exchanges with other NPCs that moves the plot forward in many occasions and not just her actions. This is an interesting contrast to previous games, where Gordon was just absorbing information and was progressing the story only in the shooty-shooty way. I did like what Alyx’s voice added to the story presentation as her character has always been very endearing. Energetic and full of almost childish curiosity at times, and stoic and determined at others, the game does an excellent job of painting Alyx as a complex and real character and expanding upon what we knew from Half-Life 2 and the expansions. It is funny that the VR title got the voiced protagonist and the “normal” once the silent one, but again it does work, not in small part thanks to the excellent voice-over by the actress, portraying Alyx. Overall the story is well told with some very interesting turns, especially at the later parts of the game. If you don’t have a VR set, but you are a fan of the series, I strongly recommend watching a playthrough as the story has some very intersign implications to the series as a whole.

Speaking of VR, I think it’s about time we address the big, virtual elephant in the room. Does Half-Life : Alyx benefit from being a VR title and does it have a point of being one in the first place? Well, in short, yes and yes. Alyx expands very well on the whole physics idea of the second game. Every object you see in the game can be interacted with and you do not use buttons to do it. You can pick every piece of clutter or simply move it around with your virtual hands. Rather than pressing a controller button to open drawers or doors, or grab pistol mags, you grab, pull and push just like you would have done it in the real world. I know that this is expected of a VR game, but it is the execution and the attention to detail, typical for Valve that pushes the game forward. The exceptional level of interactivity is cleverly used when building the world as well as the many puzzles you will encounter. One moment you will be rummaging through drawers and cabinets, searching for ammo and upgrade material(the so-called resin).The next you will be pondering upon a clever environmental puzzle that prevents you from moving forward. There are also “hacking” puzzles as well as ones that have you connect electric cables through the walls. While they make good use of the 3D space your virtual body occupies I found them a bit more on the annoying side of things, but they still served well enough as a distraction. The levels themselves are quite familiar, but in a good way, an upgraded and far more detailed version of the post-socialism architecture and interior we got ourselves acquainted to in Half-Life 2. It is quite refreshing to see the ideas of the previous game upgraded with a fresh coat of paint, with HD textures and animations. Observing them closely through VR is a thrilling experience indeed.

When done looking and poking around, you will need to have some gun diplomacy take the front stage. See, headcrabs can be a bit antisocial(though they DO want to get close to you) and the Combine aren’t the chatty type either. Shooting in Alyx is fun, but I wouldn’t call it all overly exciting. For starters you only get three guns: a pistol, a shotgun and a rifle. They do get the job done, but lack a punch and don’t feel as empowering as I would have liked them to be. The pistol I found very annoying to use until I got the laser sight upgrade as it was difficult to aim with the iron sight for me and the laser dot of the reflex sight upgrade often disappeared for some reason. What was fun was reloading said weapons as they do require a few steps like removing the used clip and manually inserting a new one. You can imagine doing so while in a heated gunfight or while a zombie is trying to get to you. Unfortunately I found the action sequences to be too far and few between. It takes, maybe, a couple of hours until you get into your first firefight with the Combine and not until late game when they become more regular. So while I enjoyed the exploration aspect of the game, my fingers were itching for a shootout a bit too much during my playthrough. f

The first one is a bit strange, but hear me out. At times the game can feel a bit too, well, gamey. What I mean by that is the way Half-Life: Alyx has a habit of showing you its gameplay tricks before asking you to perform them yourself. I bet anyone who has played a Half-Life game before knows exactly what I am talking about. You enter a room to see a new type of headcrab that has a protective layer of armor and can only be killed by shooting it in a specific spot on its belly. Of course, in this scene the headcrabs are behind a wired fence and can’t get to you. And they are crawling on it so you can see their weak spot. Oh, and said weak spot is glowing in bright red, just in case. I found such scenarios, where you are first put in a “safe” environment were occurring a bit too often for my taste and kind of made me “see” the invisible hand of the developers.

While I was overall impressed with what Valve has done with the environment and world building, I kinda got bored of it towards the end.Yes, everything is realised in a stunning attention to detail, but seeing the same type of buildings and architecture can get repetitive at some point. Not to mention we have already seen it thirteen years ago, only this time in higher resolution. Without spoiling too much, there isn’t a big change of scenery from start to finish, except at the very end of the game. Speaking of “start to finish”, Alyx is a short experience. While most sites and reviews point to a fifteen hour journey, it took me around eleven. True, it is worth replaying as the gameplay is exceptional for the most part, but still a little more would have hurt.

This to me is the game’s only issue summarized: the lack of “a little more” in terms of quantity. A little more variation in environments, a little more gunfights and weapons… I believe that, for a full prized game, “a little more” would have gone a long way for making Half-Life: Alyx even better.

Now, to answer the 500€ question: “Is it worth getting a VR set just to play Alyx”? I would have to say “no”. The game is amazing, but hardly revolutionary for VR. A VR game on steroids if you will, a benchmark even, but still confined in the current limitations of the technology. It is also an amazing, but short experience.

If you have considered buying a set in the past, though, I would say that this might be a good time to jump in. Half-Life: Alyx is another awesome AAA in the VR catalogue, adding to a so much needed amount of “critical mass” that a system needs to have in order to be worth your time and money. The game is Valve in it’s peak design. If you love their way of storytelling, the deep methodology in world building and the almost maniacal attention to detail, you will love Half-Life: Alyx.

Fallout 76 final impressions: The sins of our Fathers